Like lots of photographers I use an iPhone as a regular camera, I love the “in your pocket, unobtrusive, instant feedback” aspect of shooting with the Phone. Being able to easily share snaps with family and friends instantly adds enormously to the appeal…take a shot, tweak a little and airdrop it to my kids or friends over a cuppa, what’s not to love about that.

And of course I get a regular stream of pics and videos of my new Grandson and the Families exploits in return. As a family we carry our visual lives in our collective pockets and handbags, a well-shot snap can convey a wealth of information that words often struggle to say.

I don’t get hung on the idea that a photo should be purely the result of the camera and lens, I’ve always believed that editing and presentation are just as important. I’m convinced good edits can make the idea and message more direct and maybe even more meaningful.  Let’s face it, in the end we’re trying to tell personal stories, express emotions and convey feelings…….with pictures.

Yep hard to believe my son is 30 years old, taking a bit of chill time in the coffee shop, the pic has been treated to some selective blur and subtle edits.  I really do love the way that the DNG files work as monochromes. 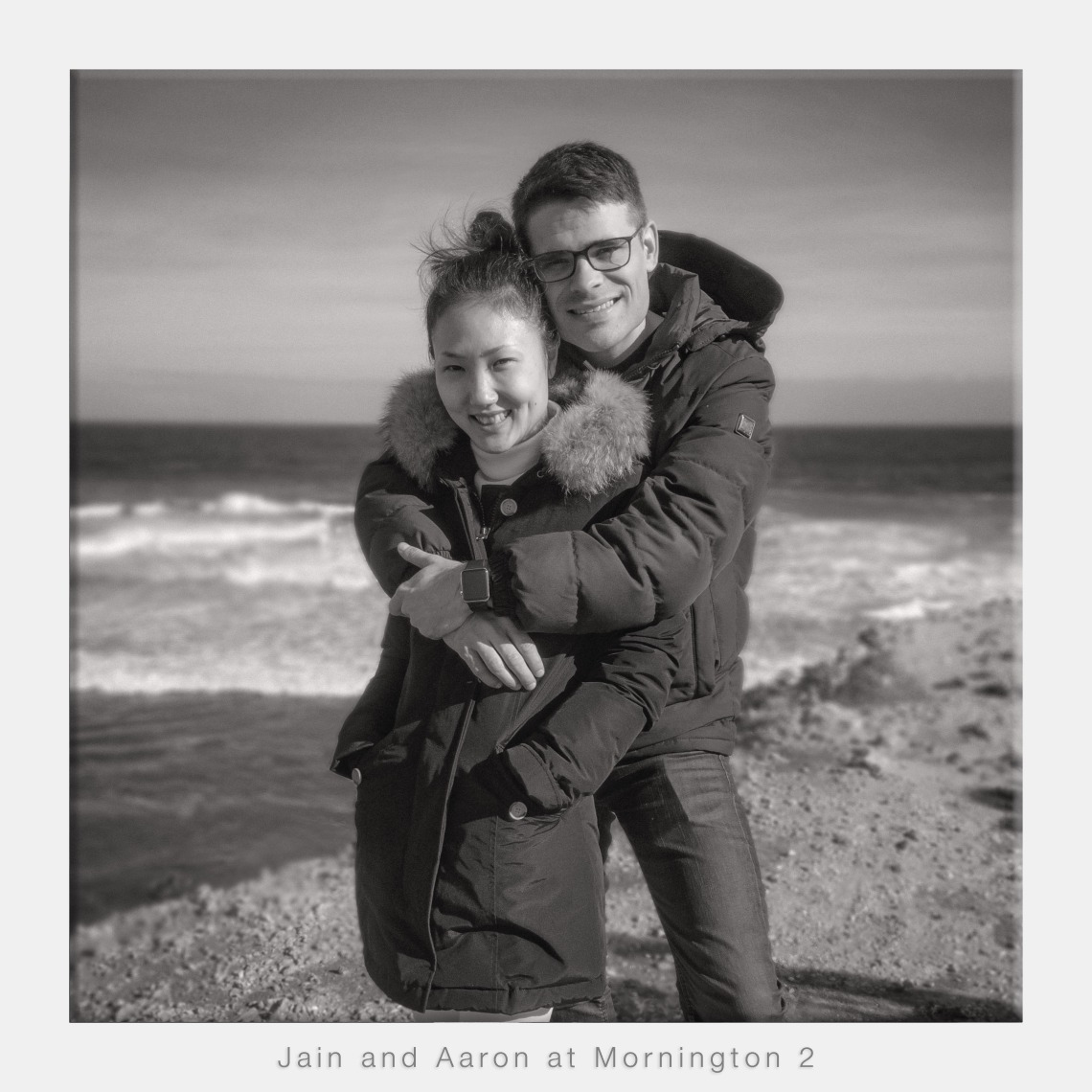 My son Aaron and his partner Jain on his 30th Birthday, this is a TLC-DNG image (you’ll need to buy the book if you want to know about TLC), its taken in full harsh sunlight but the file has edited beautifully and really it looks rather film like. The simulated depth of field certainly adds an extra dimension to the image.

For me the addition of the DNG option for shooting on the iPhone was a huge deal, it opened up an array of options that just weren’t possible with the JPEGs but more importantly, it provides me with files which are nowhere near as brittle and “vastly more editable”.

Now I don’t expect my iPhone or any smartphone to be a paragon of technical excellence but that doesn’t mean it has to be technically hopeless either. The DNG option has expanded the iPhone’s capabilities and turned it into a potentially far more serious photographic tool and one that’s definitely far from a technical disaster.

Longtime iPhone shooters will know exactly what I am talking about with respect to the JPEGs…poor highlight retention, no fine textural detail, watercolor rendering at anything above minimum ISO, rampant banding of blue skies, weird hue shifts on skin tone highlights, we’ve all seen these problems.  iPhone images don’t have to be like that, with DNG everything can be soooooo much better!

I like to edit my iPhone pics, and even edit them to quite serious levels.  I want to make blow-ups if the image is nice enough, I want to crop, I want it all, regardless of what camera I take the photos with.

Yes, of course I could use one of my other cameras, but then I don’t normally take a camera kit to the coffee shop or out to a family dinner, or most places in fact, but I always have my phone.

My wonderful Grandson Milton, apple of his Poppies eye, isn’t he just beautiful.  Taken with window light using UniWb DNG and then DOFsimm’d to taste.  The image prints superbly well.

I realize some people might say, look, Brad, you could get that shallow DOF and big blow-ups with the pics with your Sony Nex, your Olympus OM.  Well, sure I could if I had those cameras with me at the time.

I don’t shoot zillions of pics, I’d rather shoot just a few select images, editing them into what I want is pretty quick and relatively painless and just because photos are shot on an iPhone doesn’t mean they need to look half-baked.

Back to that DNG stuff, there’s much to love about it, but for me, the two most important aspects are the increased highlight tonality and the ability to have the fine textural information in the photos preserved.  I know Apple likes to kill noise stone dead so it looks all peachy when the average punter zooms in for some pixel peeping fun but seriously that “wrapped in plastic” look just doesn’t cut it for me.  I have a healthy relationship with noise anyway, we can both get along quite nicely, I’d much rather be given the choice between going plastic or analogue thanks very much.

Basically, the DNGs allow for a more 3D like rendering, being able to hold those near white tones makes the images look far more organic and the increased textural detail adds more shape and form to surfaces and this is evident even without any serious editing.

Back to the editing front, I just love that I can push the tones around in DNG without getting that horrible tonal breakup that seems to afflict most iPhone JPEGs, want to vignette a bit, lighten a shadow, dodge some skin tones, burn some highlights, no problem it all just works much better. 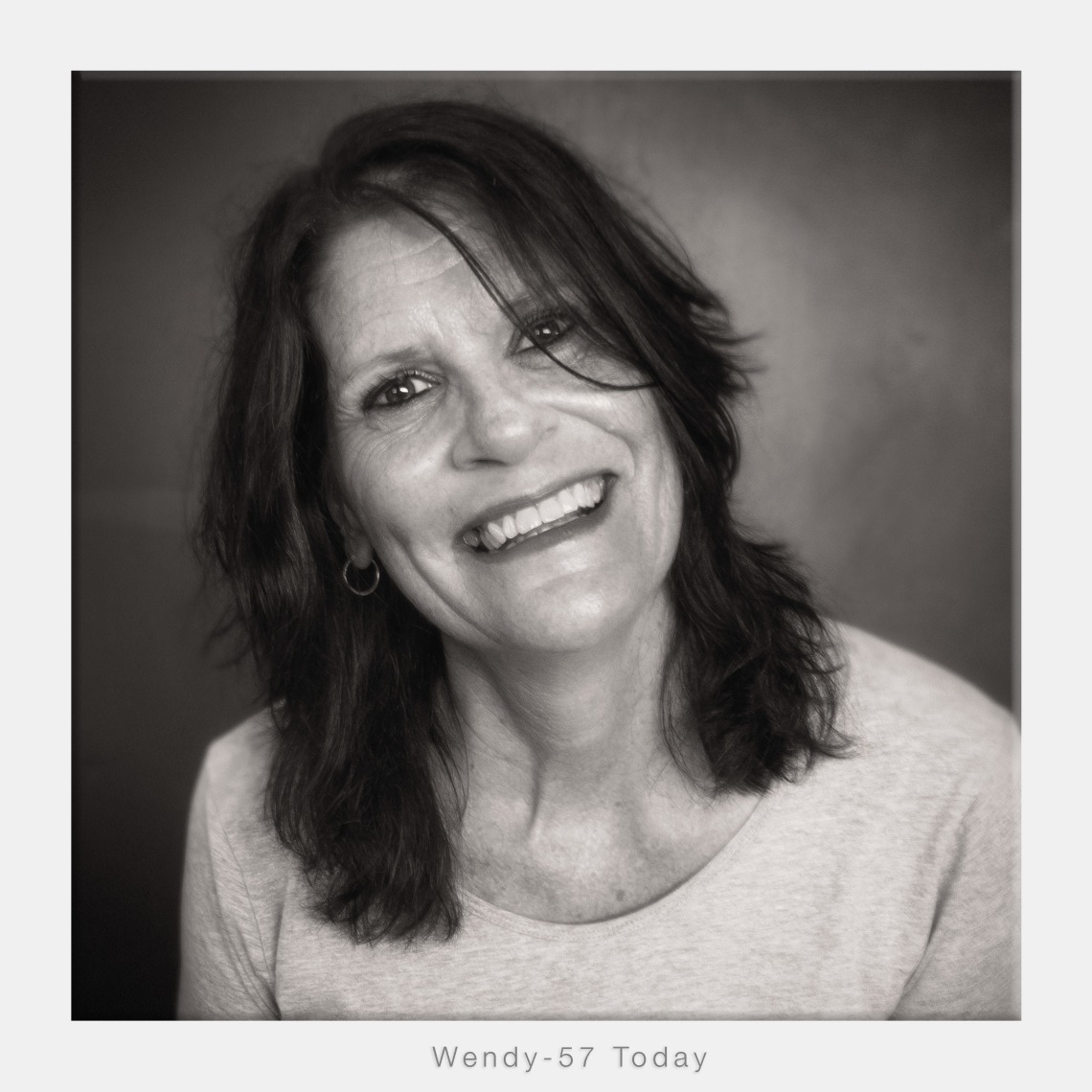 Wendy, the love of my life, we’ve been together for 40 years, this little snap was taken in one of our favourite coffee shops, it was inside and under dim light but the DNG option made the most of it.  I love that smile even after all these years.

What really gets me excited is when I want to create depth of field effects. I realize a lot of photographers will get more than a bit uppity about this, thinking it’s sort of cheating by denying Olympus of the opportunity to sell me a very nice 25mm f1.2 for my OM camera to do this all automatically for me. (Olympus are about to tempt me with three more very fast f1.2 lenses I believe, I feel movement in of the wallet in my pocket)

Honestly, though I actually have some solid creative reasons for sometimes taking this simulated DOF approach and anyway isn’t this approach much the same as what Apple is already doing with the iPhone 7S Plus and other makers on the cutting edge of experimental camera technology are trying to achieve.

Consider this, with a bit of work I can pretty much get any sort of effect I want, bokeh effects are adjustable, depth of focus controllable, field curvature can be simulated and lot’s more. Fact is I often DOF sim with shots taken at say f3.5 on my regular cameras instead of going down the ultra shallow DOF shooting route, we have choices as they say.

The big advantage with the DNGs for the all this Doffy Sim stuff is that the “in focus areas” are just, well… more in focus. Details are more resolved and they respond far better to a wide array of post-shot sharpening processes, like ultra fine radius sharpening, high-pass filters, noise texturing and more. I look at it this way, it’s always possible to blur sharp bits but it’s not possible to get sharpness out of blur. So starting with a sharp image with a more extensive depth of field and selectively blurring can often be more successful that staring with one with marginal overall sharpness and then trying to add detail back that was lost due to technical depth of field limitations. You’ve probably gathered I’m not a big fan of the “6 eyelashes and half an eyeball in focus” look, but I know lots of folks are…which is fine.

I must point out that I would not attempt any of this Doffy Sim stuff on the iPhone itself, any of the apps I’ve tried to use for these effects are just plain horrible, basically, they lack the fine control you need and it’s just really hard to do on such a small screen. All that said my new iPad Pro is a different beast altogether.

Note: If you do know of an iPhone app that really does this DOF sim stuff well I’d also love to know about!

Lightroom mobile has proven to be a brilliant editing app for dealing initially with the DNGs, I remain seriously impressed be just how good it is.  Using Lightroom in conjunction with Snapseed for fine tunings and effects provides a killer family pic combo. Honestly, the two are just a superb for most needs and it’s utterly amazing that neither will even ask you to remove your wallet from your pocket!

Note that I wouldn’t use either for simulating Depth of Field effects, that’s always down in Photoshop but Snapseed can do some passable simulations if you use the layers functions.

Our little girl, Holly the Collie, frankly she is far too smart for her own good, but she looks a treat in the Autumn leaves and the DNG is quite excellent at fully recording the subtle whites in her coat.

Ultimately I take a sort of hybrid approach with the family and friends iPhone snaps, I shoot in DNG, do an extraction in Lightroom mobile, follow it up with some tweaking in Snapseed and then hand it on to my family and friends via airdrop or email if they don’t have the airdrop option. It normally takes about 4 mins, not instant, but quick enough. Later on, if I decide I like the pic enough I’ll airdrop the pre-edited JPEG to my trusty Mac and give it some Photoshop time. I then re-send the newly cooked result via email to my family and friends.

I don’t normally process family and friends DNGs on the desktop but for some more serious holiday or commercial shots where I want ultimate quality, I’ll cook them in one of my RAW editing programs, usually Iridient Developer, which provides for some serious image quality that will utterly belie the iPhone origins.  (yep, that’s all covered in one of the upcoming books)

In the end, the only thing that I find a bit limiting with the iPhone for family and friends snaps is shooting under really low light (though DNG helps a lot) and the lack of a more telephoto lens.  The standard wide lens does kind of apply its own perspective look to shots, but I’ll upgrade to the new dual-lens iPhone 8 later in the year so that aspect will probably cease to an issue for me. 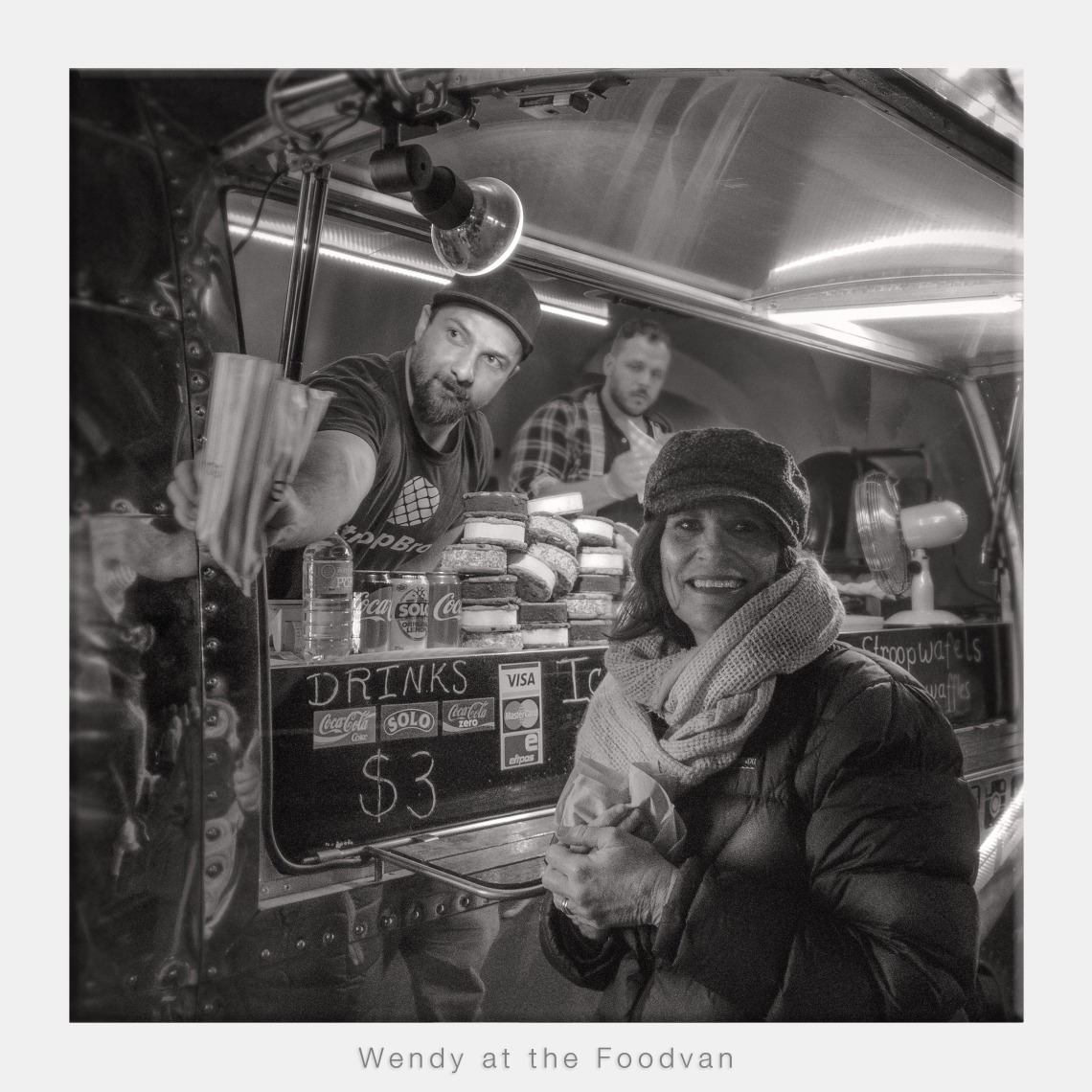 By rights this should be just about an impossible shot, taken under very low light handheld at 1/40 sec, Wendy was actually very strongly backlit with the exposure set to record the highlights, yep it’s a bit grainy but it’s nice grain and I truly treasure this shot,  a great reminder of a lovely but very cold evening we spent with some friends out on the town.  Of course its DNG, a UniWb version in fact.

Get Ultimate iPhone DNG on the iBooks Store: